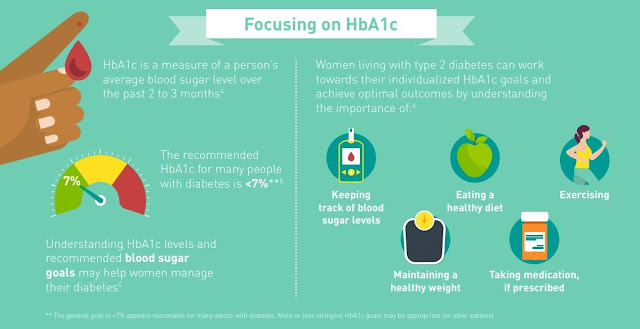 It was 1996. It was two years since I resigned my job in a publishing concern, undertook various works for a living, and lastly started a desktop publishing unit (DTP - typing and layout desining of books).

I purchased a computer, but, to be frank, I have never touched a computer earlier! In the company where I worked earlier as a manager, there were a few systems. Computer operators used to operate them, but I have never touched one. I have seen the backside of the monitor through the small windows in railway booking / bank counters. Those were the days when people used to believe that computers must be kept in AC room, otherwise they will heat up… If you press any wrong key by mistake everything will be lost…

The computer which I purchased for my DTP unit was a 386 model, i.e. IBM 386. IBM means not a branded one, but an assembled one, with an Intel i386 microprocessor. One of my friend's friend's friend was running a computer assembling company in Munirka, and he brought the system and fixed it in our office. People who read this story today may not be aware what is a 386. Before 386, there was another version called 286. Even before that, there were systems without hard disks. Anyway, let me come to my system.

The system had 260 MB hard disk, Windows 3.0 version, Page Mager 4. UPS were not common then, and so I had opted for a power stabiliser which weighed about 8 Kg, and costed 6500 rupees. A 14" monochrome monitor. I had already purchased a Laser Printer – HP Laserjet 4Plus – with the help of Nakkeeran Gopal. That was the best printer HP ever produced.

Those were the days when we used to type in MS-DOS. Even formatting of typed text could be done in DOS – i.e. Disk Operating System. For copying, deleting of files, we used DOS commands. Completed works were saved in floppy disks. There were two kinds of floppys – one was 5.25" and another 3.5". Microsoft Word was yet to come.

The office space I selected for my unit was in Indrapuri, a congested area populated by working class Tamil people. I got a computer, but not an operator. Then came a lady for interview. She was about 5 feet tall, slim, and her fingers were thin and lengthy – just like my fingers. Her husband too accompanied her.

Already I have installed a Tamil software – fonts as well as typing tool. I gave her a few pages to type in Tamil. Her fingers moved over the keyboard as if a dancer's feet moving on the stage. She did not look at the keyboard at all. The Tamil software which I had installed could not cope up with her typing speed, and letters appeared on the screen only after about 15-20 seconds after she typed. Her name was Mythili. No need to say that Mythili Sankaran was appointed.

In the last twenty years or so, I have purchased a few more computers / laptops. A few more operators came and went. But, she was the only one who became a member of our family, my trustworthy right hand in my works. Even if I had to go to south on holidays, she will manage alone. 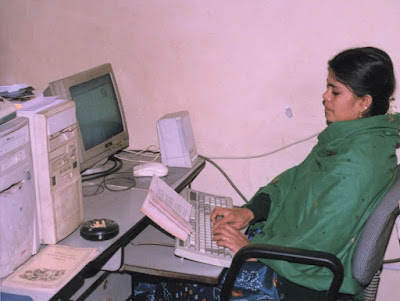 During my young age, after finishing high school education, it was a norm in those days that one has to learn typewriting – if an institute was available. And, typing institutes were there in almost all towns. It was a place for young lovers too. I too joined in one of the institutes and went there daily carrying a few white sheets, rolled in my hand. I too learnt English typing, typewriter mechanism, etc., but forget everything in the next 30 years. Now I have to start to learn typing a…s…d…f…g…f… from Mythili again. She also taught me how to operate the system. She was my First Teacher.

Then came Windows 3.1…, 3.1.1, … 95, 98, … to XP. Page Maker 5.0, 6.0, 6.5, 7.0. We both learnt a lot as the systems and the softwares were improving. We both learnt to type in Inscript keyboard. Her typing speed was amazing. She was an expert in creating shortcuts using autocorrect to type lengthy words in MS Word, thus she can just type three / four alphabets for a 15-20 letter words. As there was a need for working in other designing softwares, I learnt Corel Draw, Photoshop etc., in which she could not excel, yet she also worked on them. She used to say, "Sir, you have excelled your guru – guruvukku minjiya shishyan!" Even now her words reverberate in my years.

Her typing method was different. She would sit on the chair with her legs folded – as if sitting in floor. A copyholder will be kept on the left side of the monitor where manuscript will be kept. Her eyes will move only on the script, she won't look at the monitor. She will type one para / page, then press Control+S, then go through the typed matter, correct any spelling mistake visible, then press Control+S again. Even today I have a few books which she has typed, but still pending for my layout designing. Whenever I see or open those files, I can visulalise her sitting and typing.
* * *
Phone will ring. It may be a call from her brother Raghavan. Their dialogue will go on in a typical Tamil Brahminical language. Phone will ring again, and it may be a client. Her language will be purely official – either in Hindi or in Tamil. She knew almost all my clients and almost all of them were happy with her behaviour.
* * *
Occasionally we had some interesting conversations.
— Sir, why almost all the poets behave like fools?
— What, fools? Whom you are talking about?
— I am talking about Bharathi. Chellamma borrows rice from here and there for making food and this Bharathi throw the rice to crows and birds! Was he nuts? What was there in his head – brain or something else?
This happened when she was typing Bharathi's biography.
— What would be the age of Thiruvalluvar when he died? About 300?
— Why are you asking like this?
— See, If I start to write a letter to my dad, it takes about a week to complete. This man, Thiruvalluvar, has written almost all matters that too in a crisp manner. That means he should be having a lot of experience. That experience could not be gained in a single life time like us.
This conversation happened when she was typing Thirukkural.
— Wah … wah… Got a manuscript written by …………………… Ha!, for a few days it wont be difficult for typing.
She said this when a new manuscript arrived, and the translator's handwriting was so good that it would look like printed matter.
— Oh my….! I have got this ………………………… manuscript!!! If he comes here, we should teach him how to write – like a teacher beat his hand with a stick.
She will say this when a manuscript with a poor handwriting comes to her. (Whom she referred here is also here in Facebook. He has also read this.)
— I am surprised how this man was able to understand what is in a woman's mind!
This comment was about Aadhavan, a short story writer.
* * *
How she could make everyone as her friend was a mystery for me. People known to me, my clients, my friends, relatives – she could talk with everyone with ease. Every year, on my birthday, first b'day wish will come from her. (Normally I don’t remember my birthday.) 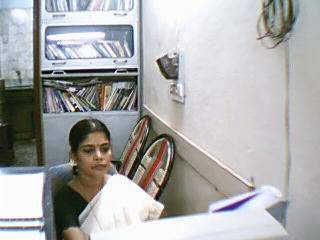 Once she came with a bag. I asked her what was that.
"Yesterday I went to the market. Purchased a t-shirt."
"T-shirt?! For whom?"
"For our Jaya."
"Jaya? Who Jaya?"
"Our Jayakuamar Sir! Today is his birthday."
Jayakumar was a young man from Tirunelveli, who came to Delhi in search of a job, and was with me for a few years. He became one of my family members.
Mythili had a great memory power. She never failed to wish people known to me on their birthdays or marriage days.
… Do you remember this day? This is the day when I joined.
… Today is Jai Shankar's birthday. Have to wish him.
… Ten years back you shifted to this place on the same day.
… Have you wished your sister's daughter? Today is her marriage day.
… Last year, on this day, we all went to India Gate, do you remember?
* * *
Her first child was a daughter, Dharini. Second one was a son, Manikandan. After the second delivery, she was diagnosed with diabetes. Subsequently, both the kidneys were affected. Yet, both were functioning on 50% of their capacity and she could manage with a little medication and a strict diet.

After a few years, health problems came up. By that time, modem has come into use, and typed files could be sent by e-mail. So, I gave her a computer to work from her home. Manuscript will be given to her, and she will type and send mails. Her husband Sankaran will take / bring manuscripts. Occasionally I will also visit her home to service the computer.

By 2010, complications increased. She had to go for dialysis. Because of her health, she had to opt for peritoneal dialysis – done at home. As a chain reaction, problems also came up – getting medicine in time, infection, getting service of a nurse occasinally for changing the tubes fitted with her body. Yet, she was working until August 2010.

By the end of the month of October 2010, I had to go to Tamil Nadu on some personal work. Before leaving for south I called her and informed about my trip. “Please visit me before you leave Sir,” she requested. "I am sorry, I have heavy load of works to finish before I leave. If I come there, whole day will be gone. Don’t worry, I will visit immediately on my return," I said.

One 1st November, I was sitting in a browsing centre in Tiruppur, to write an article for All India Radio, which was to be broadcast next day. For about 20 years, I used present a programme on sports for AIR. I had to send it by mail. As I was browsing and taking notes about sports events, my cellphone rang, and it was a call from Sankaran. Mythili was unwell and she had to be admitted in a nearby hospital, he said.

This was not new, because earlier too she had been admitted into the same hospital and she will go back home with a smile after a two-days stay. This time too she will be alright, I convinced him.

I thought it was an infection problem, and she will be back home. But she betrayed me. I could not see her again.

Seven years have gone. Mythili who had stored in her memory a lot of dates has become a date.

My First Teacher lives in my memory as a date - 2 November.
*
I wrote this piece in 2012 in Tamil. Mythili's daughter Dharini asked me to write this in English for her friends. I am sorry that it took almost five years for me to fulfill her request.
*
P.S.:
November 14 is observed as World Diabetes Day and the Theme for this year is "Women and diabetes - our right to a healthy future”.
Why importance on women?
According to International Diabetes Federation :
1 in 10 women live with diabetes.
1 in 7 births is affected by gestational diabetes (GDM).
Approximately half of women with a history of GDM go on to develop type 2 diabetes within five to ten years after delivery.
But, Up to 70% of cases of type 2 diabetes could be prevented through the adoption of a healthy lifestyle.
Many do not have access to educatin, treatment and care.
Protect the health of mother and child by improving access to screening, care and education. 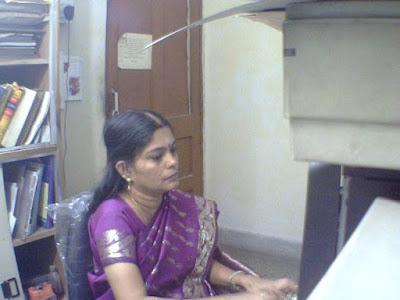